Two Communities Remain Under Investigation by the NWMO

As of January 2015, the Ministry of Northern Development and Mines had withdrawn over 300,000 hectares of land (3/4 million acres) from mineral exploration to accommodate the NWMO's investigation of 22 candidate areas, associated with the seven municipalities in northern Ontario. 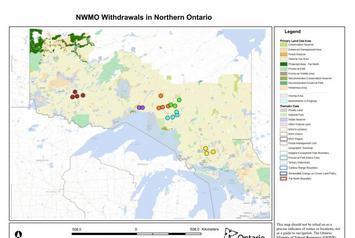 Communities under investigation by the Nuclear Waste Management Organization, as of January 2020. Source: NWMO

The Nuclear Waste Management Organization has mapped out a nine step process for siting a nuclear waste repository in Canada. Under the NWMO process, a community will express interest in the project, will be investigated for suitability, will make a decision to become the "host" community, and will make a formal agreement with the Nuclear Waste Management Organization. After the community has entered into a formal agreement with the NWMO, an assessment of the site and the safety of the project will be done, then an environmental assessment will be conducted and a demonstration facility will be constructed. The NWMO assumes that construction of the repository will follow operation of the demonstration facility.

As of November 2011, nine communities had agreed to allow the NWMO study them as part of the nuclear industry's current search for a community "willing" to receive all of Canada's high level nuclear fuel waste. By November 2012 there were 21 communities being studied. In November 2013, the NWMO released the results of a "preliminary assessment" for each of the first eight communities to complete "Phase I" of Step 3 of the NWMO's nine step process. English River First Naton and Pinehouse in northern Saskatchewan, and Ear Falls and Wawa in northern Ontario were all dropped from the NWMO study process. Creighton Saskatchewan, and Ignace, Schreiber and Hornepayne in northern Ontario have all moved on to Phase II of Step 3. The northern Ontario communities of  Nipigon, Manitouwadge, White River, Blind River, Township of the North Shore, Elliot Lake and Spanish and the southwestern Ontario communities of South Bruce, Brockton and Huron Kinloss are all in Phase I of Step 3. In January 2014 the NWMO announced it was dropping Saugeen Shores and Aaran Elderslie, both in southwestern Ontario, from the study process. Central Huron remains in Step 2 of the NWMO process.

Social and Ethical Considerations
Nuclear waste and its long term management pose numerous social and ethical challenges. For example, the wastes have been generated in five communities where nuclear generating stations are operated, but the NWMO is proposing that the radioactive burden be transferred to community that has not participated in decision to generate the hazard.The wastes have been generated over the last five decades, but the hazards will outlast all those who were alive during the period when the waste was generated by many millennia.

Siting processes for hazardous facililties generate controversy and frequently divide communities. Past efforts to site a nuclear waste facilities have been extremely contentions.

One of the key issues that neither the federal government nor the nuclear industry have effectively addressed is that of consent of the First Nations and Aboriginal people whose traditional and treaty areas might be considered as part of the siting process. While the both government and industry have made some overtures to indigenous peoples, it would be a fair summary to say that the key issues remain unaddressed. 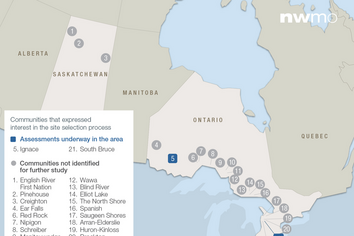 Read More about the Teeswater area

Ministry of Northern Development and Mines Has "Withdrawn" 767,000 Acres at Request of the NWMO
The Ontario government has withdrawn 310,321 hectares from mineral staking and exploration at the request of the Nuclear Waste Management Organization. The areas are associated with the municipalities of Blind River and Elliot Lake, Hornepayne, Manitouwdge, White River and Ignace's participation in the NWMO's nine step process to identify a "willing host". Lands were also withdrawn related to Schreiber's participation.