There is no deep geological repository for high level nuclear fuel waste operating anywhere in the world. .

Nuclear Waste Management in Canada: Critical Issues, Critical Perspectives
Darrin Durant,   Genevieve Fuji Johnson  2010
Nuclear Waste Management in Canada provides a critical antidote to the favourable position of government and industry. The contributors build their case by exploring key issues and developments. What do frequently used terms such as safety, risk, and acceptability really mean? How and why did the public consultation process in Canada fail to address ethical and social issues? What is the significance and potential of a public consultation process that involves diverse interests, epistemologies, and actors, including Aboriginal peoples? And how do we ensure that our frameworks for discussion are inclusive and ethical?

Uncertainty Underground: Yucca Mountain and the Nation's High-Level Nuclear Waste
Allison MacFarlane (Editor), Rodney Ewing (Editor) 2006
Uncertainty Underground is the first effort to review the uncertainties in the analysis of the long-term performance of the proposed repository at Yucca Mountain. The book provides reliable science-based information to support open debate and inquiry into its safety.Experts from the geosciences, industry, and government review different aspects of the repository system, focusing on the uncertainties inherent in each. Uncertainty Underground succeeds in making these important technical issues understandable to a wide audience, including policymakers and the general public.

Reports and Studies on Geological Repositories

Effective Arrangements for Waste from New Reactors Do Not Exist
Memorandum from Nuclear Waste Advisory Associates  to the House of Commons Energy and Climate Change Committee Inquiry into the Energy National Policy Statements. U.K. 2010

Rock Solid? A Scientific Review of Geological Disposal of High Level Nuclear Waste
Based on a literature review of papers in scientific journals, the present report provides an overview of the status of research and scientific evidence regarding the long-term underground disposal of highly radioactive wastes. U.K. 2010

The Washington D.C. based Institute for Policy Studies has released a paper about on-site storage of nuclear fuel waste. Authored by Senior Scholar Robert Alvaraz, "Improving Spent-Fuel Storage at Nuclear Reactors". In Canada, 75% of the fuel waste is in water-filled pools at the reactor station, and 25% is dry storage containers on-site. 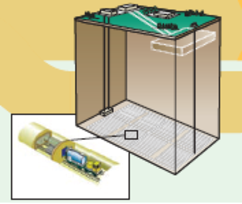 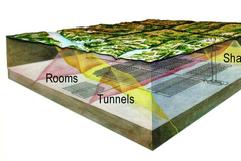 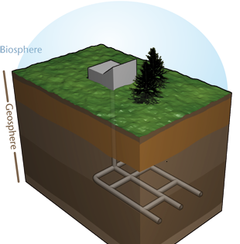 The Nuclear Waste Management Organization is currently seeking a location to construct an underground repository for nuclear fuel waste. Calling it "Adaptive Phased Management", the NWMO plan is to place all of Canada's highly radioactive nuclear fuel waste in a series of caverns approximately 500 metres below the surface.

The proposed underground repository and its surface facilities will occupy approximately 100 hectares (250 acres), with "possible" limits on activities that can occur in the surrounding area. The repository itself is envisaged to occupy a "suitable" rock formation of approximately 2.5 kilometres by 1.5 kilometres (375 hectares/930 acres).

Many countries are studying the idea or burying nuclear waste, and have been doing so for more than 40 years. But no one has done it. The NWMO says that their proposal is similar to that of many other countries, but in no other country has a deep geological respository been approved and begun to  be used for he storage or "disposal" of high level nuclear fuel waste. In addition, the government of Ontario is now considering constructing additional reactors, using a new reactor design. Independent experts have concluded that effective arrangements for waste from new reactors do not exist, citing higher "burn up" rate as a key technical difference between earlier reactors and new designs.

The concept of burying nuclear waste failed an environmental assessment review in Canada.  The NWMO's "Adaptive Phased Management" is based on Atomic Energy of Canada Limited's 1988 "concept" of burying nuclear waste in the Canadian Shield. After a ten year review - which included 13 months of public hearings - the review panel concluded in 1998 that the AECL concept had not been demonstrated to be safe and acceptable.

Given the scientific uncertainties and the many outstanding technical questions about the long term ability of geological repositories to effectively contain the radioactive wastes, and in light of the vulnerability of the wastes when left in water pools at the reactor stations, the best option is to increase research and investment in extended on-site storage at the reactor station. This is not a do-nothing approach. Currently, over 75% of the high level wastes remain in the cooling pools in the reactor station - it is being left there for far longer than the industry's generalized statement about the need to leave it in the pools for 8-10 years.

The lesson of Fukushima is that the high level waste is in its most vulnerable state while still in the cooling pool. To improve security and reduce the risks of natural disasters, human error or terrorist attacks, the wastes should be moved into "hardened" on-site storage. ​