​Preparing for Nuclear Waste Transportation: Technical Issues That Need to Be Addressed in Preparing for a Nationwide Effort to Transport Spent Nuclear Fuel and High-Level Radioactive Waste,

U.S. Nuclear Waste Technical Review Board was established by U.S. Congress in 1987 to provide independent review of the technical and scientific validity of the U.S. Department of Energy nuclear fuel waste program. including the disposal, transportation, and packaging of the waste. This review identifies 30 technical issues that will need to be addressed in a national transportation program. U.S. Nuclear Waste Technical Review Board, 2019

Risks and Hazards Arising in the Transportation of  Irradiated Fuel and Nuclear Fuel Materials  in the United Kingdom
The Review identifies potential accidents and malevolent acts that could severely damage a spent fuel transportation flask, thereby enabling the release of radioactivity, in the form of particles and aerosols, and the corresponding health risk imposed on unprotected members of public. Because the rail routes take the spent fuel trains through major urban conurbations (London, Bristol, etc) many thousands of population could be subject to radiation exposure in the aftermath of such an event., Large and Associates. U.K. 2006

Probablistic Risk Assessment of Nuclear Waste Transportation
A case study conducted for the State of Nevada by Radioactive Waste Management Associates, Provides an excellent background in the topic area. U.S.A. 1990

August 2020 : The Nuclear Waste Management Organization has released a "draft transportation planning framework" with an "Invitation to comment". No deadline stated, other than a general timeline of releasing another version in 2021.

NWMO began touring their nuclear waste transportation display in 2014. The display is a full sized replica of a 1987 transport design by Ontario Hydro, re-certified by the Canadian Nuclear Safety Commission in ~2013 without public review. 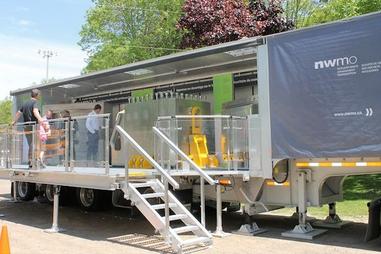 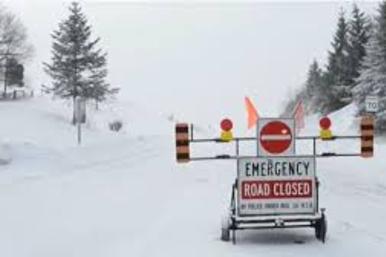 Transportation of nuclear fuel waste will come with its own set of hazards and risks. The practice is relatively unknown in Canada, and the few incidents of highly radio-active nuclear fuel waste being transported in Canada are not comparable to the frequency and volume of transportation that would be required to move all of Canada's nuclear fuel waste to a single location. There are risks of accident, but there are also concerns with the transport of the fuel under "normal" conditions.