Half-life, in radioactivity, the interval of time required for one-half of the atomic nuclei of a radioactive sample to decay (change spontaneously into other nuclear species by emitting particles and energy), or, equivalently, the time interval required for the number of disintegrations per second of a radioactive material to decrease by one-half.

The half-life for some isotopes is hours or even minutes, but for others it is hundreds of thousands of years or longer.

High-level radioactive waste primarily is uranium fuel that has been used in a nuclear power reactor and is “spent,” or no longer efficient in producing electricity.

Spent fuel is thermally hot as well as highly radioactive and requires remote handling and shielding.

Nuclear reactor fuel contains ceramic pellets of uranium-235 inside of metal rods. Before these fuel rods are used, they are only slightly radioactive and may be handled without special shielding.

During the fission process, two things happen to the uranium in the fuel. First, uranium atoms split, creating energy that is used to produce electricity. The fission creates radioactive isotopes of lighter elements such as cesium-137 and strontium-90. These isotopes, called “fission products,” account for most of the heat and penetrating radiation in high-level waste.

Second, some uranium atoms capture neutrons produced during fission. These atoms form heavier elements such as plutonium. These heavier-than-uranium, or “transuranic,” elements do not produce nearly the amount of heat or penetrating radiation that fission products do, but they take much longer to decay.

Transuranic wastes, sometimes called TRU, account for most of the radioactive hazard remaining in high-level waste after 1,000 years.

High-level wastes are hazardous because they produce fatal radiation doses during short periods of direct exposure. For example, 10 years after removal from a reactor, the surface dose rate for a typical spent fuel assembly exceeds 10,000 rem/hour – far greater than the fatal whole-body dose for humans of about 500 rem received all at once. If isotopes from these high-level wastes get into groundwater or rivers, they may enter food chains. The dose produced through this indirect exposure would be much smaller than a direct-exposure dose, but a much larger population could be exposed.

Irradiated fuel - the uranium that has been gone through nuclear fissioning in the reactor core - contains hundreds of radioactive isotopes, some of which will be radio-active for millions of years. 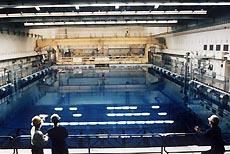 When a fuel bundle is removed from the reactor core it is one million times more radioactive than the uranium in the "fresh" fuel bundle before it was placed in the reactor.

Nuclear waste from reactors is extremely hazardous now and for hundreds of thousands of years. The radioactive and chemical hazards will outlast the containers and, over time, the wastes - which even the nuclear industry agrees must be strictly isolated from the environment - will be released.

The wastes from the  next generation of reactors will be even more hazardous according to recent reports, and the challenges of managing the wastes over the long periods of time required will become greater if Canada elects to construct additional reactors that are of a different design.

The Nature of Nuclear Waste