The NWMO has produced numerous reports on their investigations in the South Bruce area, including: 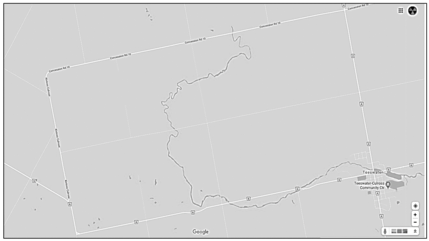 In  May 2019 the NWMO initiated what they called a “land access process”, approaching local landowners with offers to pay for the option to study their land, and to buy it out at 25% above market rate should the NWMO decide to proceed with a repository in that location. The NWMO stated publicly and in documents that they required 1,500 acres.  In January 2020 the NWMO announced that it had aggregated nearly 1,300 acres (526 hectares) of land northwest of Teeswater, Ont. The agreements include a combination of option and purchase arrangements that allow the NWMO to conduct studies and landowners to continue using the land, in some cases through leaseback arrangements. If the site is selected to host the repository, the NWMO would purchase the optioned land.

The farmlands optioned by NWMO are located approximately 30 kms from Lake Huron and would be built under and around the Teeswater River, an important tributary of the Saugeen River, which flows to Lake Huron.

A land of rolling hills and scenic roads, the Teeswater area has strong agricultural roots – it is home to Gay Lea Foods Co-operative and Ontario Goat Co-operative  - and farming, fresh food, and a rich history are deeply rooted.